Please join us for an exciting Agonis Club Lunch on May 27th, 2014.  Coach Hinton will be discussing the upcoming season and also fill us in on various recruits who have committed to OSU.


We look forward to seeing you on May 26th at Noon at the Fawcett Center! 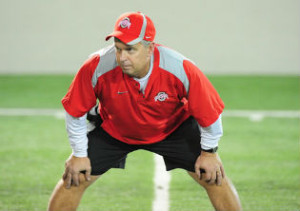 If you have any questions, please call Jeff Norris at 614-565-4634
Tim Hinton - Biography (Courtesy of The Ohio State University athletic Department)

Tight Ends/Fullbacks
Tim Hinton, who has coached in or recruited the state of Ohio for 32 years, is in his third season as the Ohio State tight ends and fullbacks coach.

Hinton is in his 19th collegiate coaching season this year and his 33rd year of coaching overall. His coaching resume includes 11 highly successful seasons as the head coach at Harding High School in Marion, Ohio. He led Harding to five state playoff berths and five conference titles and he was the 1995 Ohio Division I co-Coach of the Year.

"Tim is an awesome coach," Ohio State head coach Urban Meyer said. "He and I worked together on the Ohio State staff in 1986, but what I am most impressed with is his time spent as a high school coach in Ohio. He had some outstanding teams at Harding and his extensive experiences coaching in the state were crucial in my desire to want him on our staff."

Hinton's 32 seasons of coaching experience includes 18 seasons in the collegiate ranks with positions at Ohio State, Wilmington, Ohio, Cincinnati and Notre Dame, where he coached for two seasons prior to coming to Ohio State. Hinton also has 14 years as a head coach at three Ohio high schools: Zane Trace (1987-88); Van Wert (1989) and Harding (1993-2003).

"I have always felt it would be an honor to have an opportunity to coach for and to represent Ohio State," Hinton said. "This is a once in a lifetime opportunity to be able to work with great people and great coaches at such a wonderful place."

Hinton is currently mentoring a handful of outstanding tight ends, including senior Jeff Heuerman and junior Nick Vannett, at tandem coach Urban Meyer has called among the best in the country. The duo combined for 44 receptions for 544 yards and five touchdowns in 2013.

While coaching running backs at Notre Dame, Cierre Wood rushed for over 1,000 yards one season and in another year his players fumbled only twice...and in the same game.

Excellent ball protection was also evident among Hinton's running backs at the University of Cincinnati, where he coached six years between 2004-09, including three seasons under former Ohio State assistant and current Michigan State coach Mark Dantonio. Neither of his two leading rushers during the 2009 UC season lost a fumble in 195 carries.

Hinton spent his first three seasons as running backs coach for Dantonio's Bearcats teams. After coaching linebackers for the first year of the Kelly administration, he moved back to running backs for the 2008 and 2009 seasons.

Dantonio pulled Hinton from the high school ranks and back into the college ranks after Hinton's 11-year run at Harding High School, where in addition to directing his teams to five state playoff appearances, he developed 13 players who would go on to major college programs. He was extremely active in the Ohio High School Football Coaches Association, serving as an officer for six years, including vice-president of the organization in 2003.

While attending Wilmington College (from which he graduated in 1982 with a degree in industrial education), Hinton was an assistant coach at Amanda-Clearcreek High School for three seasons (1978-80) and then parlayed that experience into a student-assistant position at Wilmington that started in 1981 and concluded in 1984. Wilmington won two conference titles during that time and made two appearances in the NAIA playoffs.

Hinton then enrolled at Ohio State to coach in a graduate assistant capacity for two seasons (1985-86) under Earle Bruce and to work on his master's degree (educational policy and leadership, 1987). The Buckeyes went to two bowl games and earned a share of the 1986 Big Ten championship.

Hinton and his wife, Bev, have two daughters: Dawn and Drew.